I decided recently to indulge my interest in the US pop music charts.  The most interesting is the Billboard Hot 100, which ranks singles in the US and is published weekly.  Created in 1958, and with other similar data going back to 1940, it provides an interesting data set of manageable size (75 years * 52 weeks/year * 100 entries/week = around 400,000 total entries).

Trajectory of Singles on the Hot 100

Let’s start by plotting the paths a few hits took on the chart.  In each graph, the x-axis is a date, and the y-axis is the rank on the Hot 100.

Released in 2003, this track follows what I found to be a typical pattern for pop hits – a rapid rise, a period on top, followed by a rapid decline.  Lose Yourself had a 12 week reign at #1 which ties it for 4th longest all time, but after leaving the #1 spot it dropped off the charts quickly. 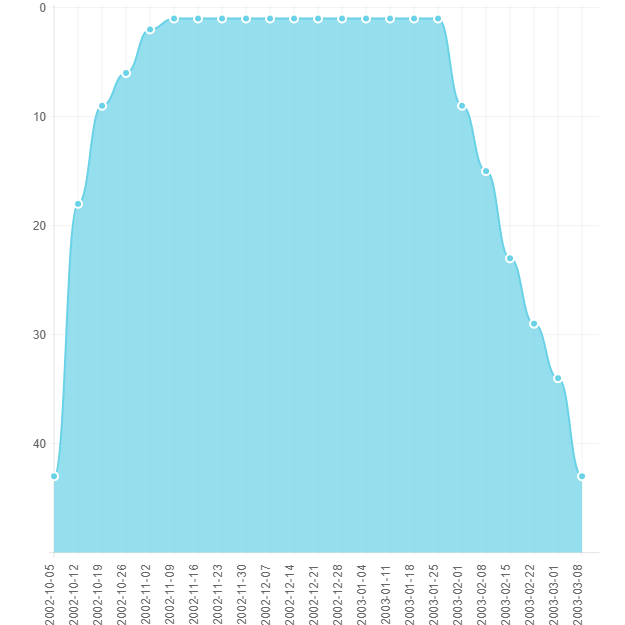 From 2011, this track spent only 6 weeks at #1, but an incredible 29 weeks in the top 10 (longer than the entire chart run for Lose Yourself), and 68 weeks on the Hot 100.  Compared to ‘Lose Yourself’ this single had remarkable staying power. 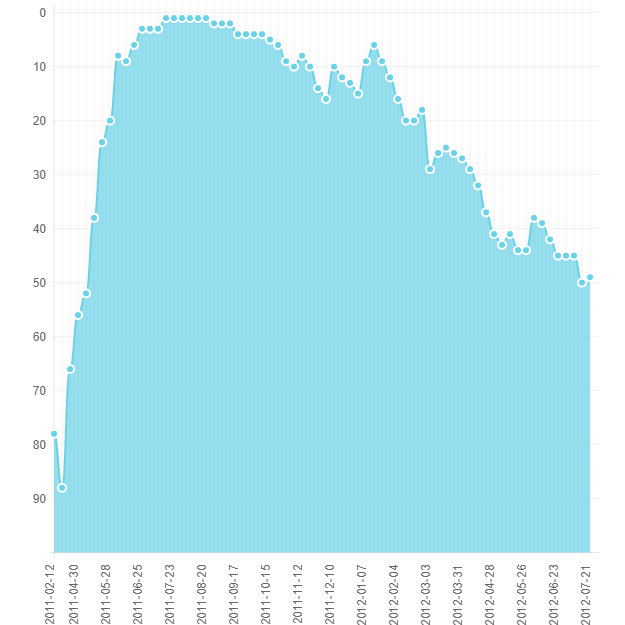 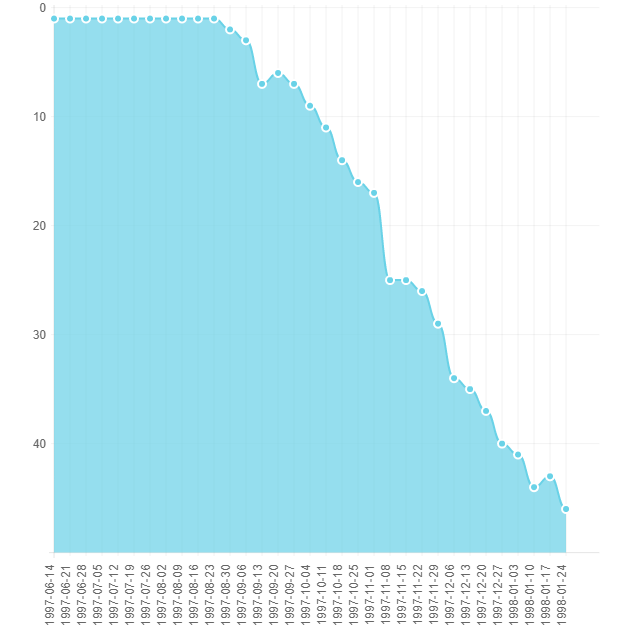 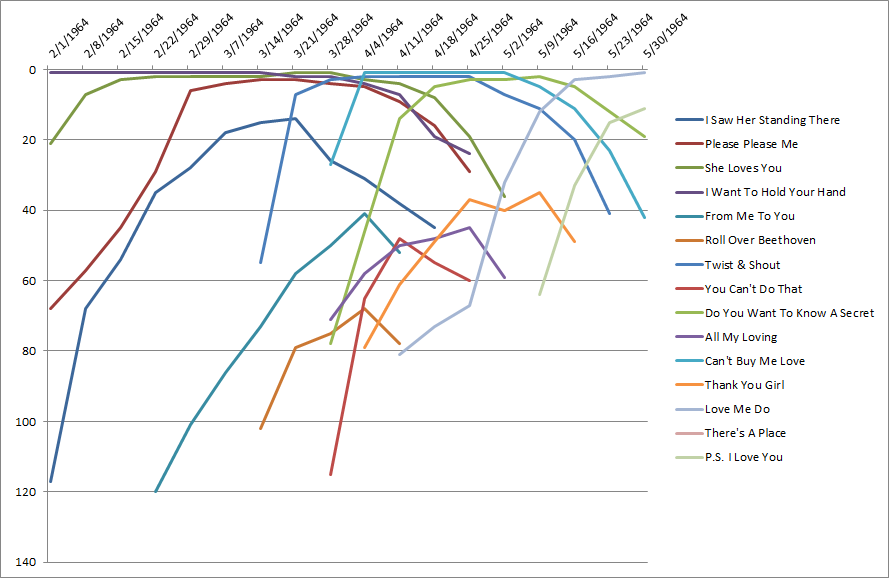 The Beatles occupied the top 5 positions on the charts on April 4, 1964 (no other artist has ever held more than the top 2 spots simultaneously).  Not only that, they had an additional 7 singles in the top 100 that week, and 2 other tracks in the top 100 referred to the Beatles in their title!

Scoring a Single’s Success Based on its Chart Run

A natural way to score a single’s success on the charts would be to take an integral to find the area under the curves we’ve drawn.  I decided only to count areas where the single was in the top 10.  In the below graph, the area of the region above the horizontal line would be found to give the score (more precisely, I took the sum of max(0, 11-chart rank) for each single over all weeks): 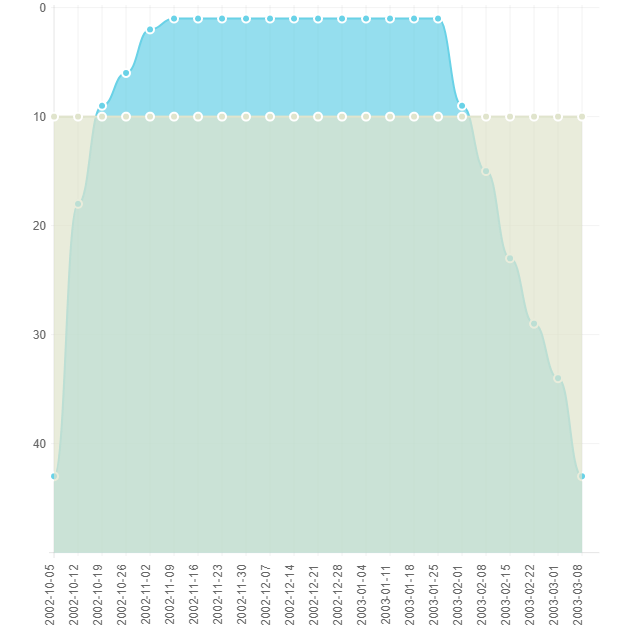 Another Scoring Idea: the exponential method

How else can we score a single’s success?  Two obvious choices:

These are already easy to look up so I’d prefer something more interesting.  What about an exponential function?  For some value of p, where p < 0, I consider a single’s score for a given week with rank r to be pr.  We score every single each week, and sum up a single’s score across all weeks it was on the chart.  As p approaches 0, this approaches the “number of weeks at the #1 spot”.  As p approaches 1, this approaches the “total number of weeks in Hot 100”.  I’ve chosen three different values of p.

Using one of these scoring functions, we can accumulate the total score of an artist over time.  On each of the plots below, the x-axis is time, and the y-axis shows the artist’s total cumulative chart scores at that time.  Periods when an artist has more hits should have a steeper slope, and periods when they are absent should appear flat.  The accumulated scores use the exponential method with p=0.9.  The actual values on the y-axis are unitless but  they can be compared across different artists assuming the same scoring function.

An incredible run starting in the mid 1950s, you can see the decline of his chart success starting in the 1960s.  There was a small ‘comeback’ in the late 60s corresponding with the so called ’68 Comeback Special’ that aired on NBC and produced a few hits, but it was nothing compared to his earlier chart success. 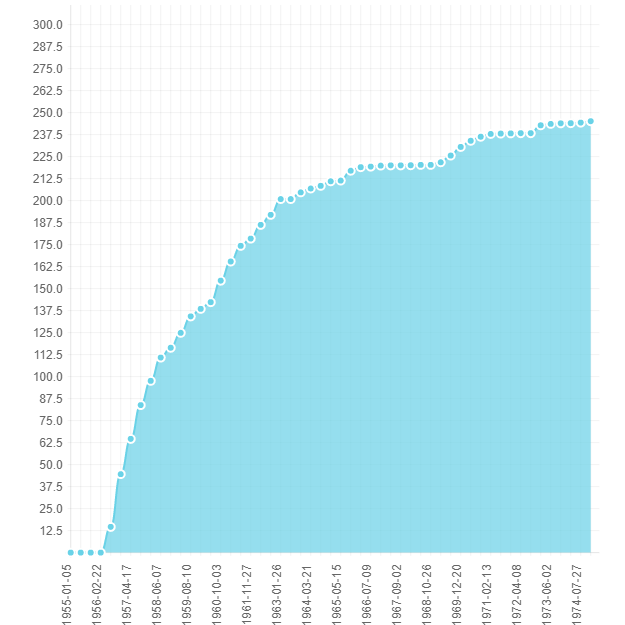 Britney hasn’t (quite) made it onto any of the top artists list, but her career follows an interesting trajectory.  After a meteoric rise in the late 90s with ‘Baby One More Time’ and ‘Crazy’, much of the 2000s was relatively quiet for Britney.  The small bump in early 2004 corresponds with her hit ‘Toxic’.  In the late 2000s and early 2010s, a series of her releases experienced huge success on the charts, arguably much greater than her original success in the 90s, with three of her four lifetime #1 singles coming out in 2008 or later (Womanizer in 2008, 3 in 2009, and Hold it Against Me in 2011). 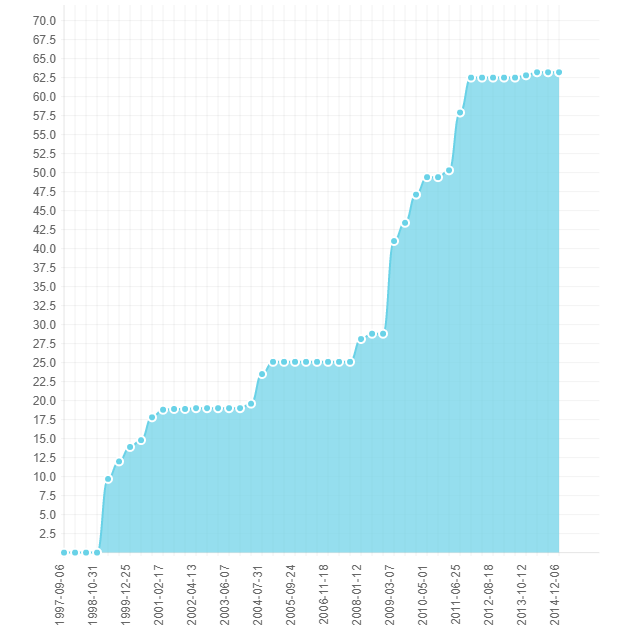 Pop Stars of the 2000s: Rihanna vs Katy Perry vs Taylor Swift vs Lady Gaga

In the mid 2000s several new pop artists emerged simultaneously.  I’ve overlaid these four artists’ careers. You can immediately see the recent dormancy of Lady Gaga, and the rise of Taylor Swift in the last three years.  For T Swift in particular the two recent steep sections correspond with the release of her last two albums.  Katy Perry and Rihanna have been consistent hit makers, though Rihanna has not released an album since 2012. 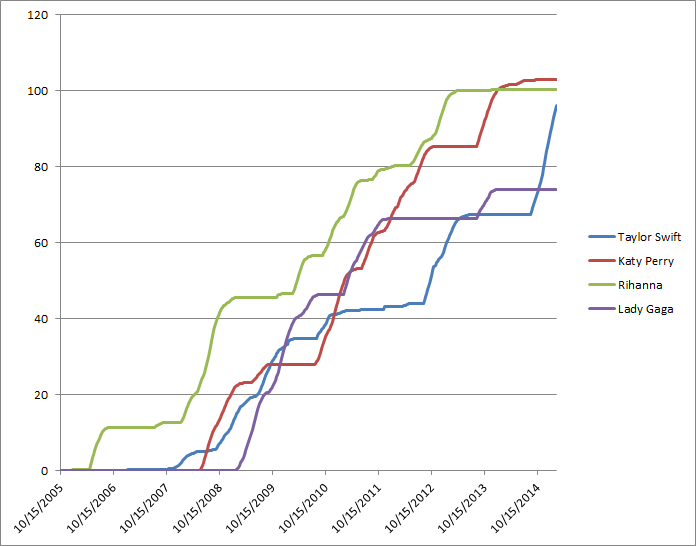 Is there more or less variety in the Hot 100 today than in the past?  I considered two ways of measuring this.  First, do current singles rise and then disappear more or less quickly than those decades ago?  Secondly, even if the rate an individual single rises and falls has remained the same, perhaps there is more concentration in a smaller number of artists.  Among the top spots on the Hot 100, do we now see more or less artists represented?

To answer the first question, I used the area method from above to score every single.  I then looked only at singles with a positive score (appeared at least once in the top 10).  For each year, I took the average score of all singles from that year.  A high average should suggest singles from that year tended to stay in the top 10 longer, and vice versa.  Nothing conclusive, but it does appear a bit lower from 1960-1990 than the last 25 years. 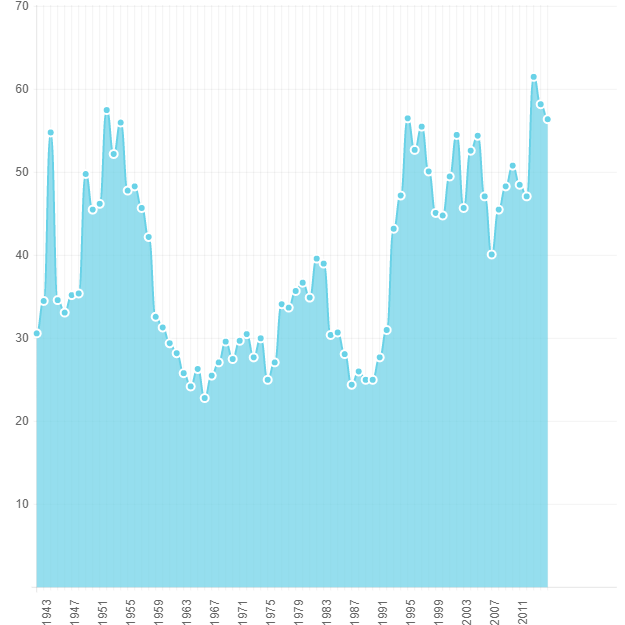 To answer the second question, for each full year in the data I computed two values.  The first was the total number of distinct artists to appear in the top 10, and the second was the total number of artists to have singles that hit #1.  Both are plotted below.  Again nothing earth shattering, but it seems consistent with Billboard diversity peaking during the 1970s and remaining lower since the early 90s. 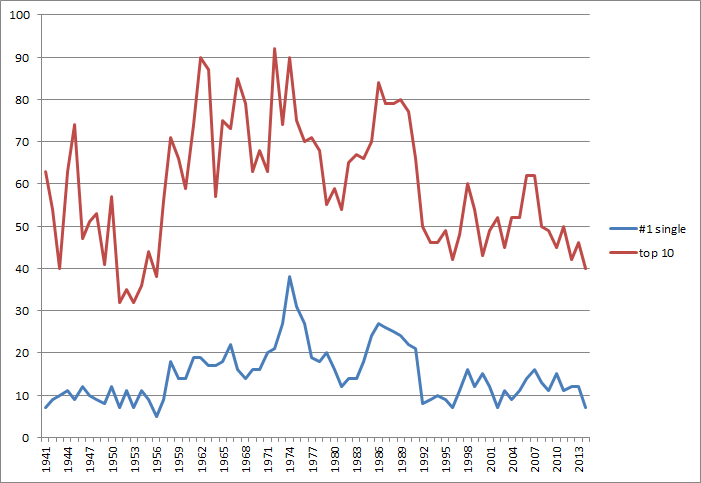 All of the data was retrieved by scraping the Ultimate Music Database website.  Python code is below.  After gathering the data, I did all work in Excel.  The size of the dataset is ~300k rows, which is still small enough for Excel to handle (with some help from VBA).  A few issues did become obvious while working with it:

I’d love to create an interactive tool for generating these types of graphs dynamically, but I currently lack the Javascript ability to do so in any reasonable time.  Instead I’ve uploaded all the raw data here, in PSV format (as mentioned song names/artists sometimes have commas, but none so far have featured a pipe character) so feel free to have at it.

Fortunately everything on the Ultimate Music Database is nicely formatted in HTML tables, so pulling it out using the python Beautiful Soup library is not too difficult.  A small note – using the default python html parser did not work, but BeautifulSoup docs suggested using html5lib, which fixed the problem.  Code is available on Github. 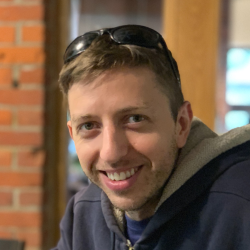 Aerial Bombing of Cities in WW2

The invention of the airplane at the start of the…